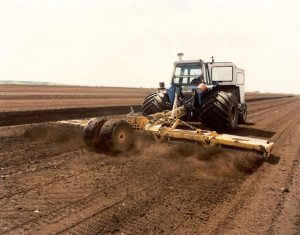 This machine cuts the bog 0.8 metres deep and 0.8 metres wide in the form of sods. It inverts the sods in the lifting motion and transfers them onto the high bog, building them in wall form and leaves ventilation space between the vertical sides of the sods.

The machine is fully tracked with light frame and supports the cutting, transporting and wall building mechanism at the rear. The cutting mechanism consists of a knife, the full width of the cut, with a central pin to divide the section, operates up and down in a plane slightly off the vertical. The slides in which the knife operates are supported on a cradle which moves backwards while the knife is on the downward stroke to compensate for the constant forward travel of the machine, and forward when the knife is almost fully raised so that it takes up the position for the next cutting stroke.

The dicing and lifting mechanism operates on a fulcrum just above ground level with the fulcrum axis at right angles to the bank. Arms extending from the fulcrum carry six cutting plates. When the knife reaches the bottom of its stroke this frame of dicing plates swings downwards dividing the section into five sods on the depth of the cut making ten sods in all. The upward swing of this frame lifts the sods, held between the plates, through half a revolution leaving them flush with the cross’ slide. The top layer of the bog, not held between plates, is thus not lifted but falls downward as the mechanism moves away and is caught by a bucket which swings in to receive it and swings outwards to discharge it in the cutaway.

The transporting mechanism is also frames fitted with spikes which swings downwards embedding the spikes in the two sets of five sods sliding them across the rear of the machine onto the discharge table. The two sets of sods are separated in the cross movement.

The discharge table after receiving the sods swings backwards on a fulcrum at its base and in doing so rearranges the sods in stair-form as it places them on the previously arranged sods.

The machine is powered by diesel engine and the transmission is by gears, roller chains, cams and linkage to the various operating parts as described.

The special feature of the machine is good ventilation and the placing of the sods in the wall in the reverse order as cut, in the bog face, thus placing the firmer and drier sods at the base of the wall.

A well-appointed cab overlooks the cutting and discharge mechanisms. 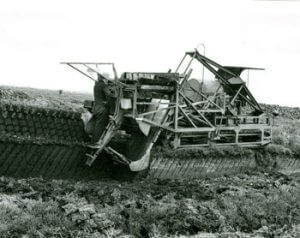 The purpose of this machine is to cut peat moss sods and stack them in wall form along the sides of the trench on the high bog.

The machine is of sturdy construction, comprising a tractor unit on caterpillar tracks, carrying the cutting and stacking mechanisms on the rear.

The tractor is powered by a diesel engine driving through a change speed gearbox. The tracks comprise timber sleepers carried on conveyor type chains running in guides.

The cutting mechanism is basically a spade actuated by beam and cam to descend, cutting a section of bog, side, centre and back; at the end of the downward stroke a spring loaded knife, carried on the bottom of  the spade from the side cutting wings, is released, completing the cutting of  the section. The cut section is elevated with the spade on its upward stroke to be received on two hinged pallets, which swing into a horizontal position, forming the table o£ a scraper conveyor. The section of bog cut is conveyed through cutting discs by the projecting tongues of  the scraper conveyor and 10 of  the 12 sods finally formed are received on a mechanised platform section of the table, which lowers and upsets the sods in wall form. The two top sods, which are unsuitable for use as peat moss, continue to be pushed by the scraper conveyor onto a chute, which throws them, clear of the side of the machine. 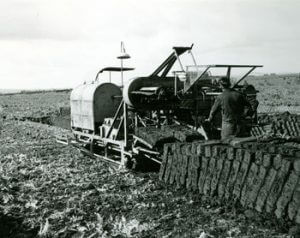 This machine is similar in most respects to the older Steba machine, except that the sod size and discharge table are completely new. The section of bog cut by this machine is exactly the same as the old Steba but instead of making ten sods from this section it makes six measuring 41 cm. x 14 cm. x 25 cm. The purpose of changing to these large sods was to facilitate the manufacturer’s (Backers) design of a discharge table to place the softer sods in the top of the wall and the firmer sods in the base of the wall and provide generous ventilating space between the vertical sides of the sods.

The discharge table takes up a horizontal position to receive the sods as they are passed along the conveyor through cutting discs. The table itself is divided into three separate sections.

As the table is lowered these sections separate by hydraulic action and when in position over the stepped face of  the wall the section plates are upset to leave the sods in regularly spaced positions and at different levels. The attitude of the table at the point of discharge has two positions, the same position occurring on each alternate stroke. The wall formed in well drained bog lands to rapid drying as compared with the close packed wall of sods made by the old Steba.