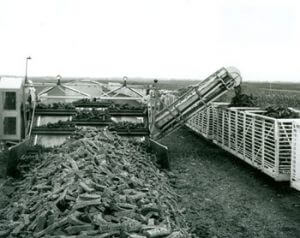 The purpose of this machine is to load sod peat from bog ricks into railway wagons on one side of the rick only.

The machine consists of a lightly constructed main frame mounted on caterpillar type power driven tracks and carrying a short scraper elevator in front, extending over the width of the tracks and a low level cross conveyor which elevates as it projects from the side of the machine.

The machine is powered by a diesel engine and a selection of travel speeds are obtainable by a 4 speed gearbox and change sprockets. Steering is by coil clutches.

The machine is driven into the end of the rick, at a speed to suit the rick size. The sod peat is lifted on the scraper elevator and discharged onto the horizontal portion of the transverse plate/chain conveyor which elevates from the side of the machine to discharge into the wagons alongside the machine. The elevating portion of this conveyor is pivoted to the horizontal portion so that the discharge end can be raised or lowered by winch to suit loading level.

The scraper elevator is pivoted on the top drive shaft centre whilst the lower end is controlled by winch, rope and pulley system.

The machine is equipped with lights to facilitate night loading and a short wave radio receiving/transmitting set is fitted in the driver’s cab. 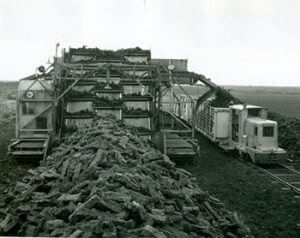 The purpose of the machine is to load sod peat from bog ricks into railway wagons on either side of the rick.

Basically the machine consists of a sturdy main frame supported on caterpillar type tracks, carrying a scraper elevator between the tracks in front and a high level horizontal rubber/canvas belt conveyor which is reversible and moveable to project from either side of the machine.

The machine is powered by an electric motor. The tracks are power driven and the machine is steered by coil clutch and brake arrangements. Various speeds are available by changing chain sprockets.

The scraper elevator is pivoted at the top, while the position of its lower end is controlled by winch, rope and pulley system. The machine is driven into the end of the rick at a speed suitable for size of the rick. The peat is elevated on the scrapers and discharged onto the transverse belt conveyor and into the wagons drawn up alongside the machine.

The purpose of this machine is to load milled peat from bog stock piles into railway wagons.

The machine consists of a tractor unit carrying a ground spiral on the front, extending either side of the bottom shaft is a bucket elevator which slopes back over the tractor unit. As the buckets go over the top sprockets of the elevator, they discharge onto a rubber belt conveyor which discharges into the wagons.

The tractor unit has a lightly constructed main frame with caterpillar type tracks. A diesel power unit is on the extreme rear of the main frame, overhanging the tracks. The transmission to the tracks is through two standard automobile gearboxes giving a selection of working speeds. These gearboxes are by-passed for idle travel at higher speeds when the full power of the engine is used. Steering is effected by coil clutch and brake arrangement.

The front ground spiral is ribbon type and handed on either side of the bucket/chain elevator so that it transports the peat towards the buckets. A back sheeting is fitted behind the spirals. A high level, short spiral, tears down the face of the large piles to ensure constant loading.

The buckets of the elevator are fabricated steel, bolted to two conveyor type chains, running on sprockets top and bottom and on intermediate rollers.

The spiral and bucket elevator assembly is pivoted at the elevator top shaft centre. The spirals are raised and lowered about this pivot point by hydraulic rams. The transverse level of the spirals is controlled by a torsion bar having a hydraulic ram as a link at one side.

The belt conveyor incorporating standard conveyor rubber faced belting and idlers has a lower end section, of fixed angle of elevation, but is pivoted to swing. The upper section is hinged to the lower portion allowing the jib end to be raised or lowered.

The machine is controlled completely from a driver’s cab located on top of the elevator superstructure which position gives clear vision of all parts of the machine and the wagons. A short wave radio transmitting/receiving unit is fitted in the cab and the machine is equipped with lights to facilitate night loading.