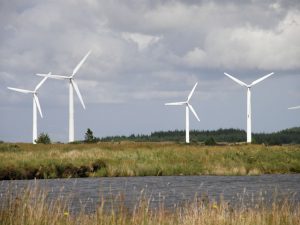 Energy has been re-branded to reflect its power generation capacity across all production methods. Now called Powergen, it’s forging ahead in the renewables sector

The remit at Powergen is to extend Bord na Móna’s generation capacity and to expand its interests in the market. Operating in the wholesale end of the electricity market, the company sells to the single electricity pool established in 2007 by the Single Electricity Market Operator (SEMO). “Outside of this market, we have a major contract with ESB Customer Supply. That’s for the off take of Edenderry,” said John Reilly, head of Powergen.

Bord na Móna has an installed generating capacity of about 134MW. That consists of a 128MW biomass and peat-fired generating unit in Edenderry and a 6MW wind farm in Mayo, Ireland’s oldest wind farm. “Our five-year plan is to extend that generating capacity by about 350MW,” said John. “The first phase of that – a 112MW open cycle gas turbine (OCGT) plant at Edenderry – is under construction. We have about 200MW of wind capacity likely to come on stream over the next five years at Mount Lucas, Bruncana on our Templetouhy bog in Tipperary, and Oweninny, Co. Mayo.”

As ever, the New Contract with Nature remains central to current and future plans. “At the Edenderry facility, one of the over-riding objectives is to reduce the carbon footprint associated with generating electricity from Bord na Móna’s portfolio. There are mandatory EU and government targets with regard to the amount of renewable electricity that must be generated by 2020, along with our new corporate vision.”

That is one driver behind the use of biomass instead of peat at the Edenderry facility. “We started co-firing in earnest in 2008 and we introduced about 20,000 wood tonnes of biomass into the facility, representing a co-firing rate of about 2%,” said John. “In 2009, that increased to 70,000 tonnes of biomass, representing a cofiring rate of about 7%. Our target for 2010 is to do 100,000 tonnes and we have a clear plan and a clear vision of how we are going to do that.”

One element of that plan is putting an increased intake system in place at Edenderry Power. “That allows us to increase the intake of biomass and it mitigates against the high moisture content of peat due to the poor harvest,” said Tom Egan, plant manager at Edenderry Power.

The plant there remains central to Bord na Móna’s power generation and offers economies of scale to the new peaking plant at nearby Cushaling. “We will utilise a lot of the existing assets and resources at Edenderry Power in Cushaling, including the grid connection, the water treatment plant and the experience of our staff,” said Tom, who is overseeing the development, construction, commissioning and operation of Cushaling Power.

This peaking plant offers Bord na Móna the opportunity to maintain wind-generated energy supply. “You can’t store electricity, so you need a thermal plant which burns fuel to create heat which rotates turbines to generate electricity,” said Tom. “The peaking plant is able to start and stop quickly and can make up the deficit in power supply when there is no wind, so it supports our target of putting wind-generated electricity on the system and maintains security of supply.

For projects manager Brendan Connolly, it’s a busy period assessing the financial viability of four live projects. The peaking project at Edenderry is under construction and should be operational by end-2010. In addition, three wind projects are in process: an 80MW wind farm at Mount Lucas, Co. Offaly, which is subject to the planning process; a 40MW wind farm at Bruncana in counties Tipperary, Kilkenny and Laois; and the 360MW wind farm at Oweninny, Co. Mayo, which expects to get a first stage grid connection.

“My job involves assessing the financial returns of these projects, alongside the operational and maintenance costs and the expected revenues depending on the output from the wind farm,” said Brendan. “The main constraint with wind projects is getting a connection to the national grid, which is regulated by EirGrid, ESB Networks and the Commission for Energy Regulation. All three wind farms are in Gate 3, which means we should get connection offers in the next year.”

Powergen’s next long-term project involves a re-development of the Derrygreenagh site into a gas-fired power station. “We’re almost at the end of the planning process and, all going well, that project should come on stream at the end of the decade.”