Archaeological Finds in the Peatlands of Ireland

Peatlands have been a very important source of archaeological material in Ireland. Artefacts found both under and within peatland deposits have provided detailed information about communities who lived in the early periods of our history as well as about the food, clothes and tools which were used from the Stone Age to recent times.

Why Does Peat Preserve Artefacts? 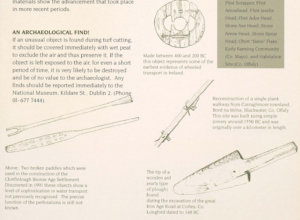 Objects are preserved in peatlands because of the acidity of peat and the anaerobic environment (i.e. deficiency of oxygen) which exists within peatland deposits. Due to these very unusual properties, many objects have been preserved for hundreds or thousands of years which would have decayed if they had been buried in mineral soils or had been left exposed to the aerobic environment.

Peatlands have been extremely important in preserving pre-bog Stone Age sites in a number of locations in Ireland. Such locations were used by early communities for camping (Mesolithic site, Lough Boora, Co. Offaly) or for farming (Neolithic site, Ceide Fields, Ballycastle, Co. Mayo). These sites had to be abandoned due to waterlogging and the early formation of peat. Subsequently, extensive peatlands covered these areas for thousands of years. The final depth of peat was approx. 3 and 8 metres respectively and this cover preserved them to the present day.

A total of c.1600 finds have been recorded to date from Irish peatlands. These finds include many toghers or trackways which were used to convey people safely across the perilous peatland regions. The trackways range from narrow pedestrian tracks to wide structures. They were built mainly from timber materials. Most artefacts recovered from peatlands are stray finds, but there are a small number directly associated with trackway sites.

How are Artefacts Dated?

Radioactive carbon (CI4) is made at a steady rate in the upper atmosphere and is subsequently oxidised to carbon dioxide (C14 02). Very small quantities of Cl4 02 are uniformly mixed in the atmosphere with large quantities of carbon dioxide (Cl2 O2) which is the non-radioactive form of carbon. The constant ratio of Cl2 to C14 is fixed in the tissues of both plants and animals. When plants and animals die the non-radioactive carbon (C12) remains unchanged in the tissues but the radioactive component (C14) decays (i.e. leaves the tissues) at a constant rate over time. For example half the weight of CI4 in the tissues decays in approx. 5700 years -this is known as the half life of Cl4. Hence, by determining the amount of radioactive carbon in archaeological objects such as wood, peat, charcoal, flesh, skin, clothes etc., the age of the object, from the year it ceased to accumulate carbon to the present day, can be determined. It has been established by this method that the oldest peats in Ireland were formed approx. 9000 years ago.

By studying the tree-ring patterns in trees which range from very old to very young and ensuring that the ages of the trees overlap, an unbroken year by year pattern or chronology can be built up. In Ireland there is a chronology or library for oak trees which dates back almost 8000 years. Hence an oak timber buried in peatlands can be accurately dated by comparing it against the established chronology. Bog oak can date back to 5500 years.

It is of interest that the togher or trackway known as Corlea 1 (Co. Longford) has been dated by this method. It has been established that the oak timbers used in the construction of the trackway were felled either late in 148 BC or early in 147 BC, hence this date has been assigned to the building of the togher.

The Range of Artefacts Found From Different Periods Are Listed Below

The artefacts found in peatlands from different periods clearly show the development of civilisation from the Stone Age through the Bronze and Iron Ages to recent time. The progression from the use of stone to a variety of metals is evident in early history and the development of an alphabet, coinage and materials show the advancement that took place in more recent periods.

If an unusual object is found during turf cutting, it should be covered immediately with wet peat to exclude the air and thus preserve it. If the object is left exposed to the air, for even a short period of time, it is very likely to be destroyed and be of no value to the archaeologist. Any finds should be reported immediately to the National Museum, Kildare St., Dublin 2.

Examples of Items Found in Peatlands