These can be defined as bogs which form from vegetation that grows due to the nutrients present in rain water.

In Ireland Raised Bogs occur mainly in the central plain (See Fig. I) where moderate amounts of rainfall occur annually. They develop and form on top of fens. They have a dome-shaped surface and are very deep in some areas where depths of over 13 metres have been recorded. (This includes the depth of the underlying fen). (See Fig. 2) 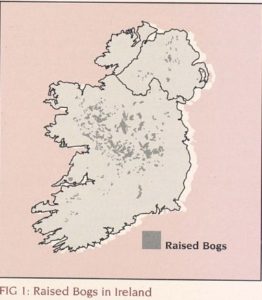 When fen peatlands formed and their depth increased to the level where the surface vegetation could no longer be influenced by mineral rich ground waters or surface waters, the type of vegetation changed to plant species which grew and tolerated the low nutrient conditions present in rainwaters. The plant species that grew and were dominant under these changed conditions were Sphagnum mosses but initially bog cotton was also common.

The Raised Bog peats formed when the Sphagnum mosses partially decayed and accumulated in annual cycles over hundreds or thousands of years in the anaerobic water­logged environment.

Sphagnum mosses are very important in the formation of Raised Bogs as they act very much like a sponge in that they draw up and hold water as they grow. They have the unique property of being able to hold up to 20 times their own weight of water in their pores and cells. The Raised Bog peats that form from Sphagnum mosses can be subdivided into two categories: older Sphagnum peat which contains some bog cotton remains and is well humified (i.e. is well decomposed) forms immediately on top of the fen and has an average depth of 2.5m. Younger Sphagnum peat contains little or no bog cotton, is of more recent origin and is relatively unhumified. It forms on top of the older Sphagnum peat layer and its upper surface supports fresh vegetation at the present time. Its average depth is 2.5 m. Hence Raised Bog peat (i.e. older and younger Sphagnum peats) are a total of about 5.0 m deep over the underlying fen. They are distinguishable from other peat types by the (almost complete) absence of any tree remains within their layers.

Rainfall is an important factor in the growth of a Raised Bog as Sphagnum mosses flourish in areas where rainfall is between 700 mm and 1000 mm and the number of rain days is between 150 and 175 per annum. 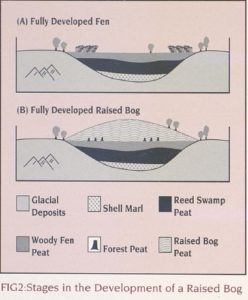 The Sundew is a very complex plant as it supplements its low nutrients intake from the peatland soil by capturing and absorbing insects, it is thus defined as aninsectivorous plant. It produces a sticky substance on its surface which both attracts and traps insects and it also secretes chemicals which digest the insects. Hence, some of the major elements (i.e. Nitrogen, Phosphorous and Potassium) necessary for the growth of the Sundew are derived from the trapped insects.

Milled peat produced by Bord na Móna is supplied to the ESB for electricity generation and is also supplied to briquette factories as raw material for briquette manufacture.

Sod peat is also produced from Raised Bogs for use as a domestic fuel.