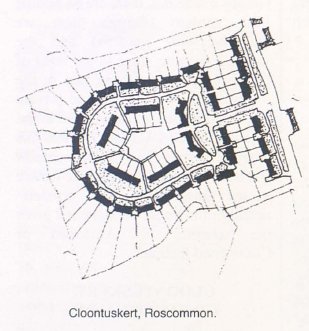 Production of moss peat by Bord na Móna which last year amounted to over half a million cubic metres has made remarkable strides since the first factory was planned in 1946. A cubic metre of moss peat as cut on the bog when dried produces a standard 12 cu. ft. bale which makes up into the equivalent of two compressed 6 cu. ft. bales each containing 15 cu. ft. of loose dry peat. Eighty percent of this production is exported.

Moss peat is made up of incompletely humified mossy or fibrous peat consisting mainly of sphagnum moss, cotton grass and other vegetable fibres. It is found in Ireland two metres deep in thickness in upper brown layers of high bogs. When dry it is very light and able to absorb and retain moisture to over ten times its dry weight. It is this characteristic which makes it ideally suitable for horticulture. It is produced in our factories in three grades:

Because of its lightness and great bulk volume it is compressed 2½: 1 and packed in polythene bags of various sizes.

In order that the winning of moss peat should be as profitable as possible from the commercial standpoint, good drainage of the layers of peat is essential due to the high percentage of water and the low percentage of dry peat fibres in the light moss peat. Peat litter as a commercial substance should contain only 30 to 35 percent of moisture, but for other uses can be sold with moisture contents of up to 60%, except in cases where the weight factor is a consideration for freight charges.

The bogs are drained using a system of longitudinal drains opened at intervals of 7½ metres. The drainage process is slow and it takes from five to seven years to prepare a bog before the cutting of peat can commence. The cutting season generally extends from June right through the winter and early spring. The peat is cut in sods but not macerated as it is in the winning of fuel peat. It is, however, left out over the winter, so that it may be subjected to the action of frost and rain. Moss peat which has been frozen in winter dries more quickly in the spring and it remains looser while doing so and it is, therefore, more easily disintegrated. It is also more absorptive than peat which has not been subject to frost. Rain helps to improve the quality of the moss by washing away humified particles of peat.

Within the last 10 years the cutting of moss peat has been mechanised, German producers having designed and developed suitable machines for this purpose. The machines cut the moss peat to a depth of one metre in two rows of five sods each and place them on the top of the bog in a continuous wall. In our bogs the average depth of moss peat is two metres and one of the original German machines has now been modified by the Board’s engineers to cut the second layer in alternate years. This method of cutting high and low layers on alternate trenches gives a good blend of the full depth of the available moss peat.

The harvesting operations begin as soon as the sods are partially dry and strong enough to be handled. Heretofore the turning of the rows of sods has been carried out by hand and as generally the sods have to be turned a second time before they are ready for collecting, a large labour force was required. A machine has now been designed to mechanise this operation. Collection is carried out by a sod collector 110 metres wide, designed by the Board’s engineers. The collector collects on each side of the ricking field into a large rick which will contain 35 standard bales of dried peat per lineal metre of rick length. It is then covered with polythene until required for processing in the factory. Loading of peat from the ricks into wagons for transport to the factories is carried out by a standard drag line with large grab.

The moss peat sods, measuring 16” x 4” x 4” approximately are brought into the factory for breaking down and grading. The mills used for this operation are specially designed and have a tearing action so that they do not destroy the structure of the peat and they keep the formation of dust down to a minimum. Dust is also extracted from the peat during the production process. The moss peat is graded by passing it over screens and it is compressed into polythene bags by hydraulically operated presses which fill and press the peat automatically. The closing of the bags is done manually.

The three grades of peat are generally available in what is known as the 6 cu. ft. Handibale pack for home and export markets, and the 12 cu. ft. standard bale bound with timber laths and wire for the large user on the home market. Smaller packs containing lesser amounts are also packed with fine grade peat for the amateur garden market.

The number of packages produced from each factory will be over 3 million when both of these factories reach their full production. There is a growing demand for moss peat all over the world and this target is likely to be reached within the next 5 years. The finished product is despatched to Britain in containers and flats, which are trans­ported by road and rail to the ports for shipment. It is also exported to the Channel Islands, U.S.A. and Australia.

The home market is supplied at the factories on the customers’ own transport.