The Kilberry Compost Plant was started mainly as a result of B&Q’s policy to reduce its peat usage over the next 5 or 6 years. This policy has the aspiration to reduce peat usage by 90% by the year 2010, although there are some doubts whether this is achievable over this relatively short period due to technical reasons. There are two ways in which Bord na Móna will achieve this. The first is the production of a 100% peat-free growing media. This is already being done mostly at the Jenkinson’s bark plants in Cumbria in the UK, in a partnership with Bord na Móna, and a smaller amount of bark is being composted in Kilberry composting plant. The second is the composting of various garden and industrial organic wastes in order to dilute the peat with the recycled material. In diluting the peat, most materials have to be pre-treated, since untreated the material would be unstable and this would have an adverse effect on plant growth. Research has indicated that the best pre-treatment is composting. Research on the composting of garden and park waste, also known as greenwaste, and other organic food and drink waste, began about 10 years ago when small piles of greenwaste (up to 10m3) were composted at Teagasc Kinsealy Research Centre as part of Bard na Móna research programme. The greenwaste came from St Anne’s Park, Raheny, Dublin. In addition other materials such as brewery waste and forestry waste were also investigated. The trial results, which were published in international journals, indicated that after the addition of certain ingredients during composting, composted green waste and other organic waste could be used as a peat diluent. Adjustments to the carbon nitrogen ratio were found to be essential for good composting. It was also found that the fertilisers added to the peat in the factory would need some adjustments. During the year 2004-2005 larger scale (50m3) composting trials were conducted in Kilberry and these further confirmed the successful findings of the previous small scale trials. In these, and earlier trials, the monitoring of temperature moisture and C02, were essential in order to proper control processes and make adjustments where necessary. Nutrient measurements in the compost pile were also essential as well as a growth trial at the end of the composting phase to evaluate the suitability for peat dilution. 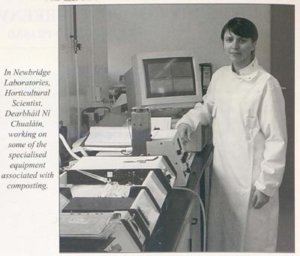 The Kilberry Compost Plant involves an expansive 4.2 ha asphalted site. The plant has the capacity and licence to compost 90,000 tonnes of organic waste. The composting area is securely enclosed and all the leachate generated in composting is collected and re-circulated. The facility is licensed by the Environmental Protection Agency to accept a range of organic materials which includes greenwaste, byproducts from the food and drink industry, and byproducts from the wood processing industry Bord na Móna gets a modest gate fee for accepting some of the raw materials. Among the raw materials, greenwaste is likely to increase in the future due to two reasons, one is the ban of organic material going into the landfill sites and the second is the separate collection of wastes from households, which is likely to become mandatory.

When the greenwaste arrives at Kilberry it is shredded into material of less than 15mm particle size. Most of this waste comes from Dublin area. Other organic wastes from the food and drink industry, or wood industry, that arrive in Kilberry, are generally already in granular form and do not require shredding. These materials, either on their own or mixed together, are put into windrows of approximately 700m3 and an appropriate fertiliser is added. The resulting mix is turned regularly using a compost turner, and regular measurements of C02, temperature, moisture and nutrients are carried out. After around 10 to 16 weeks the piles are ready for mixing with peat and larger samples are taken for a growing trial, stability measurements, self heating tests, C02 release, pH, soluble salts and complete nutrient analysis. The compost material generally cannot be used on its own for growing plants due to its high salt content. The peat is generally diluted with the composted materials after the above tests have been positive. (We have also tested the compost for potentially toxic heavy metals and human pathogens and have found that they are very low or in the case of pathogens, non existent) The mix is screened at this stage to eliminate oversize material. The dilution with peat involves transferring the screened composted material into bunkers. From the bunkers the conveyer belts transfer the material at different speeds which allows for adjustment in the dilution rates. After mixing with peat the compost is then re-screened and mixed with the appropriate rate of fertiliser. As a result of adding the composted material to peat the fertiliser formulation of the growing media, previously ascertained in relation to 100% peat products, has had to be adjusted with experimentation, and this has resulted in significant saving in fertiliser costs. Finally the compost is transferred to the factory bagging plant where it is put into loose filled bags of various sizes, or bailed, ready for transportation to B&Q stores in the UK or Ireland.

The success of the Kilberry project has been possible due to the active support and involvement of a number of Bord na Móna staff, including David Keating, Commercial Manager; Jim Kelly, Kilberry Factory Manager and his staff; co-workers at the horticultural laboratories in Newbridge and Eamon McKay Design Engineer.

Dr Munoo Prasad retired in June from the position of Bord na Móna Chief Horticultural Scientist; he has continued working with the Company on contract.

Back to Innovation Page