Celebration of Our Rich Heritage

Everyone in Bord na Móna is extremely proud of its 75th anniversary and of the efforts of the current and previous generations of employees in making the company what it is today. To celebrate and mark this major milestone, Bord na Móna has created an exhibition called “Heartland”, launched a heritage website – www.heartland.ie and revamped the company archive. 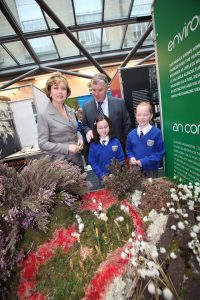 President Mary McAleese formally launched the Heartland exhibition in Dublin on September 21. That event, which attracted major media coverage, was hosted by Bord na Móna’s Chairman, Fergus McArdle, and attended by over 100 guests. These included Ryan Tubridy, Duncan Stewart, Frank Aiken (Jnr) and Hugh Andrews, son of Todd Andrews, founding father of the Turf Development Board and Bord na Móna. A contingent of pupils from the Holy Family School, Newbridge, and a group of 6th class pupils from Scoil Naomh Pádraig, Ballybryan, Rhode, Co. Offaly, also attended. In her address, the President referred to a letter to Bord na Móna, written in 1972 by then President Eamon de Valera, in which he wrote, “The country was deeply indebted to Bord na Móna and its officers, during the Emergency, and its contribution to the national economy since then is a source of pride to all.”

She went on to say, “I add my thanks to Bord na Móna for what has been achieved over these past 75 years, no two the same, each provoking new ways of looking at our boglands, our energy needs and ourselves. You are now on a new journey, enshrined in your strategic New Contract with Nature, an innovative corporate strategy, which will see you use your resources to develop wind energy, renewable fuels, new environmental technologies and waste recycling. It’s a different future that beckons but the commitment to Ireland’s welfare remains a constant. You are sacred custodians of times and traditions as well as fen and bog and future. These things have been brought carefully to life in this exhibition, which I hope will be enjoyed by many visitors. To Bord na Móna, I say thank you for the last 75 years – ad multos annos. I wish you continued success.”

The items on show in the exhibition consist of artefacts, images and information relevant to Bord na Móna’s technical and social as well as economic development over the decades since the foundation of the Turf Development Board. There is also a glimpse into the future provided in a rather novel way.

It has been a near impossible task to represent in this exhibition the story of Bord na Móna. So much has happened both within the company as well as externally that directly impact on our activities. In the end, we chose to convey merely a sense of what Bord na Móna has been about, through a selection of themes, portrayed through the combination of images, stories and artefacts.

The exhibition was on display in Newbridge (Credit Union) in October and is in Tullamore during November/December. It is intended to show the exhibition next year in other towns near to Bord na Móna’s traditional heartland and details of these events will be made available in due course.

A special edition of the popular RTE television programme “nationwide” was broadcast on Fri 18th September to mark the anniversary.

This covered several aspects of Bord na Móna from the historical to present and future and included a good mix of community and culture.

As part of the exhibition, a companion booklet has been produced and a complimentary copy has already been sent to each employee and pensioner. As well as the exhibition, a book on the history of Bord na Móna, aptly titled “Brown Gold”, will be published early next year. Chairman of the Board Fergus McArdle asked Donal Clarke (former company secretary) to write this history, to ensure that a public record would exist of the unique story that is Bord na Móna and to pay tribute to the enormous contribution that the company has made to Irish life over the decades.

We have also developed a website www.heartland.ie to showcase Bord na Móna’s very rich heritage. This website not only has information about the exhibition and the history, but also contains sections on machinery and equipment as well as a list of people who have worked with us down through the years from the very beginning. This is a very interesting and worthwhile initiative and we encourage our employees and pensioners, their families and friends, to log on and discover more.

A less noticeable but nonetheless important aspect of Heartland is the work being done to build up the company archive. A specialist archivist, Louise Kennedy, has been recruited to support Tony McKenna in this important and valuable exercise, aimed at collecting, recording, cataloguing and protecting key aspects of the company heritage.

Already, a significant number of photographs have been collected and anyone who can supply more pictures, documents or items of interest should contact Tony McKenna or Louise Kennedy or any other member of the communications team. 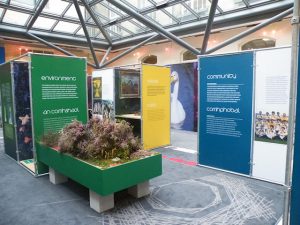 “It’s a different future that beckons but the commitment to Ireland’s welfare remains a constant. You are sacred custodians of times and traditions as well as fen and bog and future.”  – President Mary McAleese

“As a bog woman, I enjoyed the exhibition” – Margaret McGrath, Castlecomer, Kilkenny

“This will help with my junior cert”  – Peter Weller, Killiney, Co. Dublin

Back to Culture Page